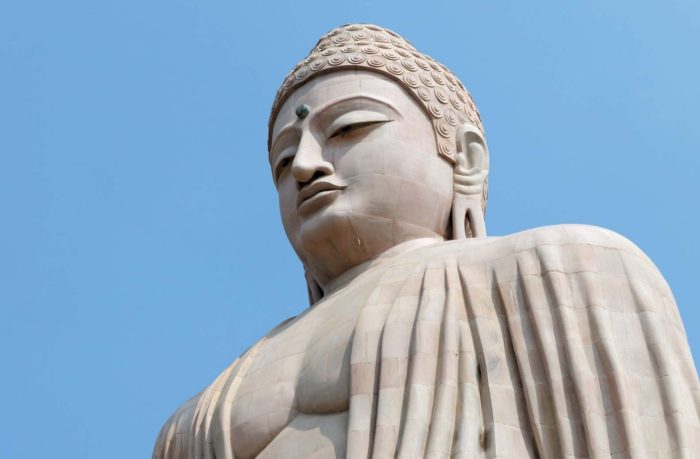 Buddha statue refers to a type of sculpture art that is closely attached to religious beliefs, presenting the image of the prophet of Buddhism. Buddhist art and Buddha statues have been famously worshiped for more than 2000 years in many Asian countries. Let’s explore the history of the Buddha statue and its meaning in the following article.

The First Period of Buddha Statue in India

In the first few centuries of Buddhist history, Indian Buddha was not yet sculptured in human form even though Buddhist narratives had mentioned the human figure of the Buddha. As the Buddhist scripture, Dighanikaya, stated: the Buddha himself did not favor having the representation of his body after his death. As a result, there were no Buddha statues in human form in India until the second century C.E. when the anthropomorphic representation of the Buddha was found in India. At the time, most statues were crafted from wood.

After the introduction of anthropomorphic representations of the Buddha in India in AD 200, Buddhist art in India was developed during the period of aniconic sculpture. Indeed, the Buddha was represented by various ways of symbolism, including a footprint, an empty throne, and the wheel of Dharma. Moreover, Buddhist arts like the episodes of the Buddha’s life story were sculptured on wood tablets in order to decorate the stupas (commemorative monuments). Later on, the influences of Greek culture had spread into India before merging with Indian arts. Consequently, the power of Greek civilization, cultures, and arts changed the way Buddhist arts were depicted and represented from mere symbols of the Buddha into more humane figures.

The two important Indian centers that were the most influential in Buddhist arts at the time were Gandhara and Mathura. Gandhara was located in the area identified as today’s Punjab in the northern area of Pakistan. After the conquest of Alexander the Great of the Greek empire in 332 BE, this area was established as a part of the Greco-Bactrian and Indo-Greek Kingdoms. Therefore, the arts and cultures in this area were influenced immensely by Greek civilization, including the concept of humanism.

On the other hand, the arts in Mathura still presented the traditional concepts of India corporated by the concept of anthropomorphism. Mathura was located in the central northern part of India, so Indian culture was more powerful than the influences from the west. However, some key concepts from Greek were adapted into Indian arts, such as Yaksas and Indian mythic giants. Moreover, the Mathura school critically influenced the accessories of Buddha statues, including thin muslin on the left shoulders, the wheel of the palm, and the lotus seat.

The Buddhist Arts Outside India

Even though Buddhism in India was very powerful and popular, there was a division of its own beliefs. First, some scriptures of Buddhism were brought to the northern part of India and called ‘Mahayana Buddhism’, while other scriptures called it ‘Theravada Buddhism’ in the south. Those two sects separately gained their believers in different parts of Asia. Each of them can be divided as follows.

The Northern Route of Buddhism

The Southern Route of Buddhism

The northern route of Buddhism transmission occurred in the first century CE through the transportation of merchants on the Silk Road to Central Asia. From there, missionary and Buddhist monks have translated Buddhist scriptures into Chinese, which allowed Mahayana Buddhism to grow in China. Mahayana Buddhism then enormously developed and created its own version of the statue in China. Buddhist statues in China blended with Indian art through trades and exchange and presented a markedly life-like expression statue. More astonishingly, Chinese Buddha statues were carved from wood, sandstone, limestone, wood, ceramic, gilt bronze, or copper alloy.

Influenced by Indian culture, Buddha statues in China, Japan, Korea, and other countries that succeeded Mahayana Buddhism were presented in different sitting positions and facial expressions. However, Chinese-based Buddha statues were depicted in a more slim figure and thicker garment than those from India. Furthermore, those Mahayana countries did not only inherit the representation of Buddha, but also the Buddha’s Bodhisattvas or the Buddha’s past life forms. Those Bodhisattvas were initially made as attendants to the Buddha, but later on, were created as stand-alone works.

Similarly, Theravada Buddhism was expanded through the Silk Road and sea connection between China and the Southeast Asian region. Moreover, the trade route linked Myanmar to India, and Sri Lanka to Thailand, which also played a significant role in spreading Buddhism into SEA. Thereafter, many countries in the Southeast Asian region were greatly influenced by Theravada Buddhism and Indian cultures, going all the way back to the Vedic period. Since then, the main materials for Buddha statues in this region still remain stone and cement, painted or gilded with gold sheets. And lastly, Buddha statues in certain countries such as Thailand, often present flames and aureole around the Buddha’s back.

These are interesting points that may help you understand the history of the Buddha statue and the distinctions between its several iterations. We hope that you enjoyed this little snippet of a very rich and multi-cultural history.