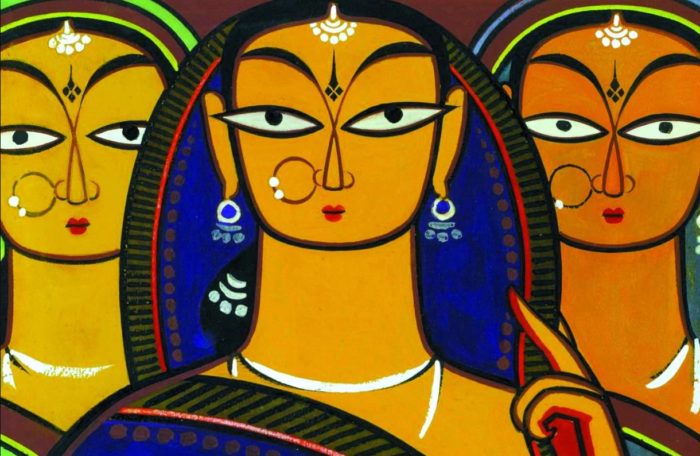 As you probably know, India is not only famous for its culture or food, but also its various art forms. It might come as a surprise to many people that some of the most famous Indian paintings represented women in all their glory. Indeed, women portraits in India got lots of interest over the years, thus why we created this guide showing the top 6 well-known Indian woman portraits that are legendary for their beauty.

This painting was done on paper with tempera (a fast-drying medium), making the color pigments so vibrant. The 3 women are dressed up in traditional Bengali, and their heads are covered with sarees in indigo color. This color is important since it is a historical reference to the uprising of the Indigo movement of that time. Also, the 3 women wear bindis, bangles, necklaces, earrings, nose rings, and head lockets.

The painting was presented in the Jamini Roy exhibition (Journey to the Roots 1887 – 1972) at the National Gallery of Modern Art, New Delhi. Jamini Roy won many awards such as the Padma Bhushan (the 3rd highest award) in 1955 and the Viceroy’s Gold Medal in 1934. In 1955, he also won the Lalit Kala Academy (the highest award in fine arts).

The “Three Girls” portrait was painted in 1935 when the artist, Sher-Gil, decided to move away from the academic style to which she was used. From there, she gravitated towards a flatter, more modern style, the latter being the foundation of the Three Girls’ configuration. In this famous painting, we can see 3 young women on the verge of adulthood and marriage, showing her empathy for their difficult situation. As Sher-Gil said: “I am personally trying to be through color and design, the medium of line, and the interpreter of the life of the people, particularly the life of the poor and sad.”

This beautiful painting portrays the notable and gorgeousness of Bani Thani. The famous piece of art has been the property of the Kishangarh School of Indian miniature paintings for several years. In fact, Bani Thani was the ideal of Indian beauty, presenting the following characteristics:

Aside from being gorgeous, she was also an accomplished singer and poetess, regularly singing bhajans in praise of Krishna. One particularity with this portrait is the richness of the painting’s color scheme, which was sparkled with pure 24k gold dust. Last but not least, one painting of the decked-out lady (a direct translation of Bani Thani) got featured on an Indian stamp on May 5th, 1973.

Firstly, Mohini was the only woman avatar of the Hindu god Vishnu, and she was known as an enchantress. She could make her lovers fall so deeply in love, which would often lead them to their doom. Mohini was also known as being part of the demons’ destruction throughout ancient Hindu texts. This painting shows Mohini who wears a white saree with golden lace while sitting on a swing, which is one of Raja Ravi Varma’s most famous art pieces. Moreover, this painting was created in the early 20th century and is still surprisingly in excellent condition. Mohini is beautifully represented in the painting with an interestingly realistic background, which was uncommon at the time.

Tamil Girl with her Parrots painting

S. Elayaraja is an artist who is famous for painting portraits that look so realistic that you could mistake them for an actual photo. His most famous piece “Tamil Girl with her Parrots” has gained a lot of recognition around the world. In this incredible painting, a girl is sitting with her parrots and subtly smiling with a specific look of perception in her eyes. Elayaraja was focussing on every detail such as the cemented floor and the brown wooden frame in the back. And of course, the cute parrots perched on the window, as well as the shining gold-threaded patterns coupled with the folds of the girl’s dress, are all part of what makes this portrait a must to see. As a final note, the artist grew up in the temple town of Tamil Nadu, and the painting represents his relationship with the cultural background that came from the latter.

Woman With the Lamp portrait

The “Woman With the Lamp” portrait, also known as the “Glow of Hope”, was painted by S.L. Haldankar. The latter is a watercolor masterpiece which is now stored in the Jayachamarajendra Art Gallery, which you can find inside the Jaganmohan Palace in Mysore. Furthermore, it is one of the most prized art pieces of the gallery and is a major attraction for tourists and locals. Mr. Haldankar created this portrait in 1945, and even though it has been almost seven decades since its creation, The woman with the lamp still gets as much attention as before. Interesting fact: this painting was unfairly credited to Raja Ravi Verma for several years before being properly credited to its rightful creator.

Every portrait has its own beauty and meaning. Judging which one is the most beautiful would be impossible, as people don’t always have the same perspective. That said, we can all agree that every portrait we presented above is an amazing piece of history, one way or another.