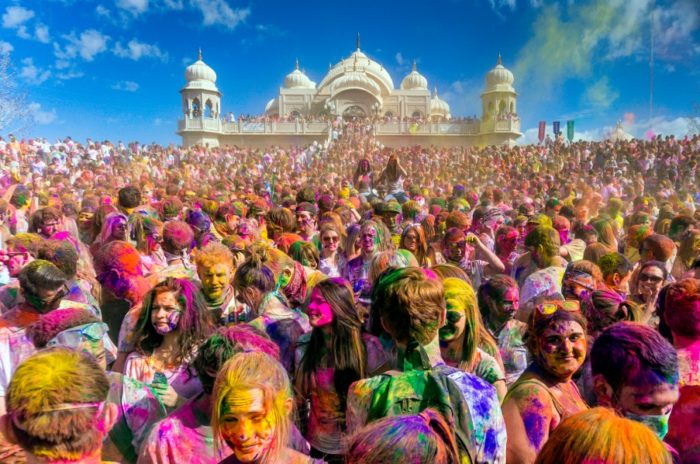 The Holi festival honors the destruction and eventual burning of Holika, a demoness. It is a festival meant to celebrate the victory of good over malevolence. The victory was realized after Lord Vishnu, the Hindu god of preservation offered assistance. The moniker “Festival of Colors” was inspired by Lord Krishna’s childhood antics. Lord Krishna was Lord Vishnu’s reincarnation.

Holi Celebrations—When Is It Celebrated?

It is important to note that the reason Lord Krishna is seen as a reincarnation of Lord Vishnu was because he was known for playing pranks on local girls. Often, he would drench them in colors and water. In some parts of India, the festival is often celebrated in the Spring season. Locals do this as a form of giving thanks for having received abundant harvests in the past season.

Traditionally, this festival is celebrated one day after the full moon. This means that it occurs in March of every year. Areas such as Odisha and West Bengal normally hold it a day earlier than other places. Also note that there are areas in India, e.g., Vrindavan and Mathura where the festivities begin a week earlier than all other places.

Since time immemorial, Holi celebrations taking place at Vrindavan and Mathura have been known to be the biggest. The two places are about a 4-hour drive from Delhi. This is where Lord Krishna is believed to have spent his childhood. Nevertheless, it is important to point out that safety is often a concern for women attending the celebrations.

This is due to the rowdy behavior of the local men. It is, therefore, recommended that women or tourists looking to attend the celebrations do so as part of a guided group. While the celebrations are known to occur all over India, they tend to be more exuberant in some regions compared to others.

Foreign tourists attending Holi celebrations often choose to visit Rajasthan, especially regions such as Jaipur and Pushkar. Local backpacker hostels in these areas will normally organize Holi parties for their visitors. Rajasthan Tourism is also known to hold a special Holi festival each year in Jaipur.

How Is the Holiday of Colors Celebrated?

Celebrations involve smearing colored powder over other people’s faces, dancing under water sprinklers, hosting, and attending parties, as well as throwing colored water at other people. Bhang is one of the many party flavors you can expect to find and consume at these parties. The paste made using the cannabis plant has for long been consumed by attendees as part of the festivities.

It is also normal to find large cities all over India organizing special Holi celebrations featuring colors, rain dances, and music. Cities known to do this include Mumbai and Delhi. It is also possible for tourists in India to celebrate the holiday with local Indian families in Jaipur and Delhi.

What Kind of Rituals Are Performed?

The highlight of the Holi festival is the eventual burning of Holika, the demoness. Traditionally, large bonfires get lit a day before the festival in order to make its occurrence. The lighting of the bonfires is referred to as Holika Dahan.

In addition to conducting worship ritual, the attendees gather around a fire where they get to sing and dance. They also walk around it a minimum of three times. In some areas of India, some of the participants actually get to walk across the hot fire coals.

Firewalking, as it is known by the locals is deemed as a sacred practice. Sara Village, located close to Surat, Gujarat is one of the places where fire walking occurs. The Narada Purana, a Hindu text is credited with mentioning the destruction of Holika.

King Hiranyakashyap, also known as the demon king was Holika’s brother. Records indicate that he wanted her to burn Prahlad, his son as punishment for following Lord Vishnu. This would mean that the son did not worship his father, as the father expected of him.

Holika is said to have sat with her niece in her lap as the fire continued to burn as many believed that she could not be burnt by any fire. Nevertheless, Holika got charred to death, while Prahlad got to survive. His survival is credited to his devotion to Lord Vishnu who protected him from the hot fire emblems.

Holi has for many years provided attendees with a unique chance to let loose and disregard social norms. It is, however, not uncommon for local men to take matters too far and become disrespectful to women attendees. Therefore, if you are a single woman planning to attend Holi celebrations in West Bengal or Odisha, try to avoid going out in public places alone.